There were complaints about the 8 pages that I used in a previous magazine to celebrate the first Wiltshire Clumberfest, so this time I’ll restrict myself to two (OK, three if you include the pictures!).

Here’s the headline information though—we raised a magnificent £1150 for Clumber Health and Rescue!!!! Thank you to you all who helped out before during or after, came along, dug deep in your pockets or did all of the above!  Now, the money raised is for the health and rescue funds, but the small group of us who largely organise and manage Clumberfest decided that there would be a small string attached to the donation to health and that was that £500 would be ring-fenced for the “Give a Dog a
Genome” project (see details later in Clumber Clips).

So what had we learnt from last year? Well, we made the weekend 1 day longer, so you could arrive on the Thursday and have the Friday as a “chill out” day. We decided that even though the Companion Show raised £200 for Alzheimer Support last year, it was a bridge too far and took too much time and resources away from Clumberfest on the Sunday morning, so that was canned this year.  We would however have a Clumber only (well the odd honorary Clumber as well!) Fun Show on the Sunday, apart from that it was much the same as 2015!

Friday, as I said earlier was a “chill out” day, nothing was planned, we did intend to go for a walk and end up at a pub for lunch, but just never seemed to get around to it!  We just spent the time in Adrian’s event
shelter taking about Clumbers, putting the world to rights, drinking and scoring (out of 10) the efficiency other people setting up! (An advantage of setting up camp the day before!)

Saturday came dry and warm and the first activity of the day (apart from breakfast!) was the Clumber Walk. Pam and I had walked this a few weeks earlier and completed the Risk Assessment (and notes). I led the way with Barbara in the rear. We had a mixture of footpath, green lane, field and towpath (with the obligatory dip in the canal for some of the Clumbers). 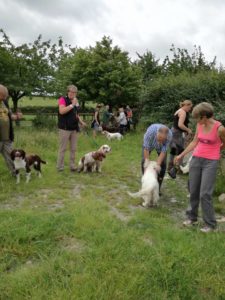 In the mean time at the camping area we had a grooming demonstration, with my grateful thanks to Heather, James and Jan as our original groomer had to cry off at the last minute.  I should also add my grateful thanks to James.  He drove down from Cumbria on Friday evening, set up his tent very late and was off back to Cumbria by 13.00 on Saturday to drop off a Guinea Pig at Stafford and then support a local show the following Sunday! What a weekend for him!  After the grooming and when the walk had returned there was a Rally-O demonstration. My wife had done some before, I’d never tried it, but Henry took to it like a duck to water.  If I ever get any time, I must find some local classes! Lunchtime came and our tame chef , Adrian, did a grand job on the barbecue with steak, “Happy Pork” burgers and marinated belly slices. (vegetarian options were available).  Saturday afternoon had a planned ring craft session, but the instructor was worn out and the heat was too much (for the dogs and humans), so we canned that and resorted to just chilling again and Graham Constable had the “scurry” up and running. 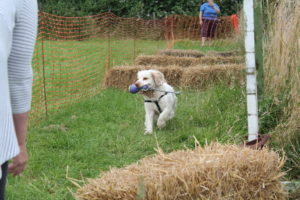 In the evening was the quiz including the “Only Connect” wall and missing vowels round.  We had a clear winner who were rewarded with Clumber pins. The rest of the night was spent under Adrian’s shelter where Heather introduced everybody to frozen strawberry daiquiris! Sunday dawned dry and warm as well, this was the day of the Clumber Fun Show which was judged by Ben Prater, a radio Wiltshire presenter who owns a Beardie,  There was a good selection of classes including Most Handsome Dog and Best ASBO!

This was followed by the drawing of the Clumber Spaniel Club Raffle which had a first prize of £100 sponsored by the Clumber Spaniel Club and many other prizes sponsored by Equafleece, Safe4, Hive Originals, Greenacres, KONG, Box Steam Brewery, Mcgrumpy and Snuffles – Goughnut, plus many other super prizes donated by supporters and members. All the time we had the Tombola running and thankfully got rid of a lot of the prizes!

All through the weekend the Sjoelen board was being played and somehow Adrian managed to fluke the high score for the £10 top prize! I’ll beat him next year (but then I said that last year and this is MY game!) Next year we’re giving the ‘fest a rest’ and having a Clumber Gathering instead—more information in the next Clumber Clips!