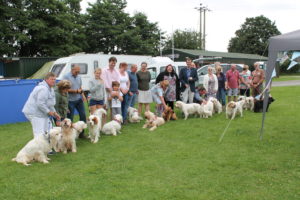 It was decided in 2016 that we had spent two years working hard to extract money from Clumber owners to support the Clumber Spaniel Club, so this year we were going to take a year off.  For various reasons, this event is run “outside” the Clumber Spaniel Club, so I need to pay for insurance for the duration and as there are few facilities available, I also need to hire in some Portaloos!

The aim was to break even on  the costs and have a thoroughly good time. We achieved both aims thanks to the generous donations of those attending. We also had a quite novel event, or “surreal” as described by the minister!

So, what was a minister doing at the Clumber Gathering? Well Nigel and Kathryn, who had attended and very much supported both the previous Clumberfests had asked if I would mind (and even see if I could arrange a “Renewal of Vows”) for them at the Clumber Gathering. A good friend of mine is an Archdeacon, so he gave me some contacts and it was all arranged. So, on the Saturday afternoon, we had three gazebos arranged together and we had a High Tea (including scones, strawberry jam and clotted cream) and following that the minister arrived and performed the Renewal Of Vows. If was after we had completed the ceremony the Minister commented that it was one of the most surreal Renewals she had done, in the middle of a field, under a gazebo and surrounded by Clumber Spaniels! 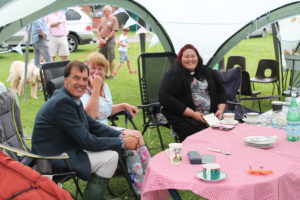 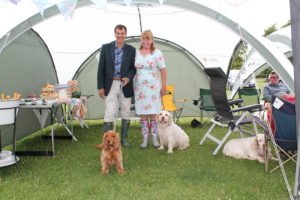 We then moved into the celebrations with Prosecco and lit the barbecues!  A good time was had by all, although it did finish rather early. Partly through tiredness, but mostly through the fact that the Pimms that was made up (and we all enjoyed) comprised a bottle of Pimms a bottle of lemonade and half a bottle of gin!  We all slept well that night!

There were no formal activities with the exception of the Renewal of Vows on the Saturday and the raffle on the Sunday. We had about 10 outfits staying at different time and many “day visitors”. Altogether is was exactly as it said on the tin. We relaxed amongst friends and Clumbers and had a great weekend. On the Monday we all went our separate ways and on Tuesday I started a new job! 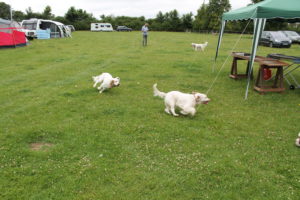 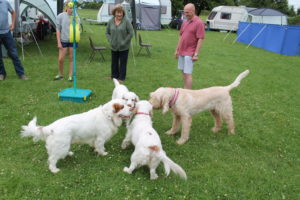 We decided that we are back to money raising next year but at a step between the previous Clumberfests and this years’ Clumber Gathering.  So in 2018 there will be some organised events, initial thoughts are a walk and Clumber games, but that will be it. Whether there is a raffle and whether it is drawn at Clumberfest will depend on the Clumber Spaniel Club committee!  So the dates for next year have been booked on the site already, so if you want to come and join us put July 5th (earliest arrival) to the 9th (latest departure) in your diaries!

We will look forward to seeing you, your Clumbers and “Honorary Clumbers” in 2018